OTTAWA, Ontario, Canada – June 27, 2018—The results are in from Branham Group’s annual ranking of tech companies, and the Top 250 companies have again set a revenue record. Full Branham300 results are online.

The Top 250 is comprised of the largest Canadian companies as ranked by revenue. This year the Top 250 generated cumulative revenue of $106.5 billion total Top 250 revenue in fiscal 2017compared to $105.3 billion in the previous year. This represents a year-over-year revenue increase of 1.14%, compared to 9.6% growth in fiscal 2016.

“The Top 250 Canadian tech companies have achieved growth every year since 2009, and the slowdown this year is not caused by weakness in the sector or the economy. Rather the opposite. Over the year between the 2017 and 2018 editions of the Branham300, a number of large firms were purchased by foreign buyers and were therefore no longer eligible for our ranking. That reduced the growth rate but speaks to the value of these innovative Canadian companies.

“So even with reduced growth, Canada’s ICT professionals once again delivered a revenue record and they can be very proud of that accomplishment. We are once again pleased to shine a congratulatory spotlight on this critical industry.”

“I could not be more pleased to present the Branham300 results again this year,” Wayne Gudbranson said. “This is the 25th anniversary of our rankings. A quarter century of celebrating a significant piece of Canada’s innovation economy is a proud milestone for us.”

72%of the Top 250 companies grew revenues

49%achieved double- or triple-digit growth, down slightly from last year’s 54%

BCE retains primacy BCE is Canada’s ICT revenue leader for the third consecutive year. Branham Group excludes portions of BCE’s revenue (such as media and wireline voice) as we do for all telecom companies, but the Canadian giant still posted $16.3 billion in eligible revenue, a 7% increase over last year.

All seven of the companies typically called telecoms generated revenue increases; the growth leaders were Videotron (34%), Shaw (8%) and BCE (7%). 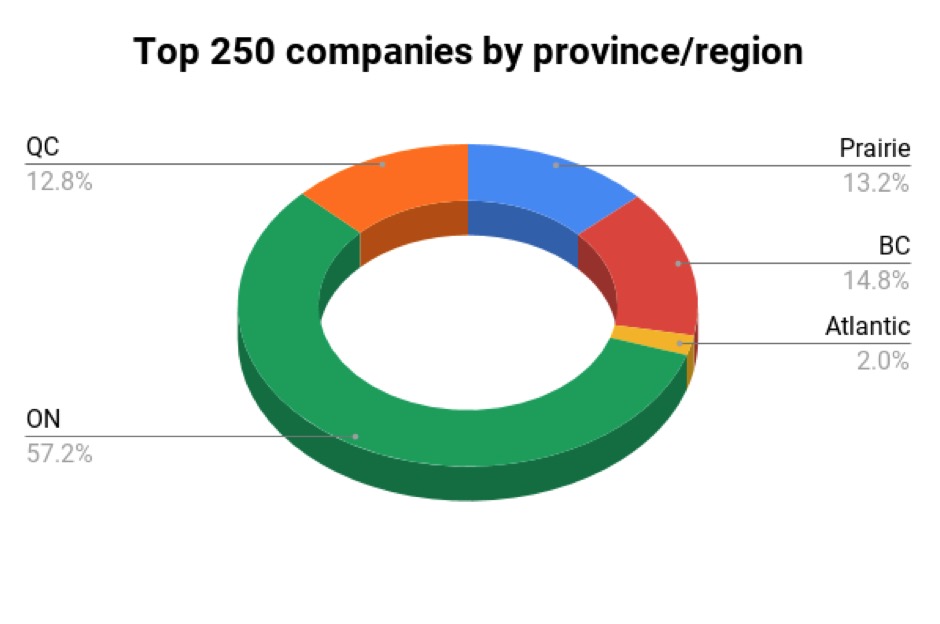 The Top 250 is divided into the industry’s four major sectors.

BCE again led the group, with earnings of $16.3 billion, excluding media and wireline voice, compared to $15.2 billion in 2016.

CGI was once again comfortably in the lead, posting a 2% revenue increase for a total that is more than five times greater than the number two company in the category.

ICT Hardware and Infrastructure:This sector retained its revenue performance, posting 14.8% of the Top 250 revenue in both fiscal 2017 and 2016. In the latest year, the sector boasts 21.6% of companies, almost unchanged from the previous year.

Celestica is again hardware champ, even though its revenue was almost unchanged from the previous year.

Branham Group tracks the most prominent non-Canadian tech companies operating in Canada and calculates an estimate of the revenue they generate within our borders. For fiscal 2017, we estimate the top 25 multinationals generated $79.7 billion in this country, an 8% increase over the $73.4 billion total the year prior. All figures are in Canadian dollars.

Notable growth performers include Facebook, up an impressive 47%, ADP with an increase of 33% and Amazon up 31%.

Top 25 ICT Up and Comers

With the Top 25 Up and Coming, Branham Group recognizes promising young companies at the beginning of their successes. It is the only Branham300 list not based on revenue.

Ontario holds the most companies on the Up and Coming list with 68% of firms, unchanged from last year, and 52% of the listed companies are located in the Greater Toronto Area. The Branham Group lists are national in coverage but, as with the Top 250 list, the bulk of ICT activity in Canada is in Ontario, and specifically in the GTA. 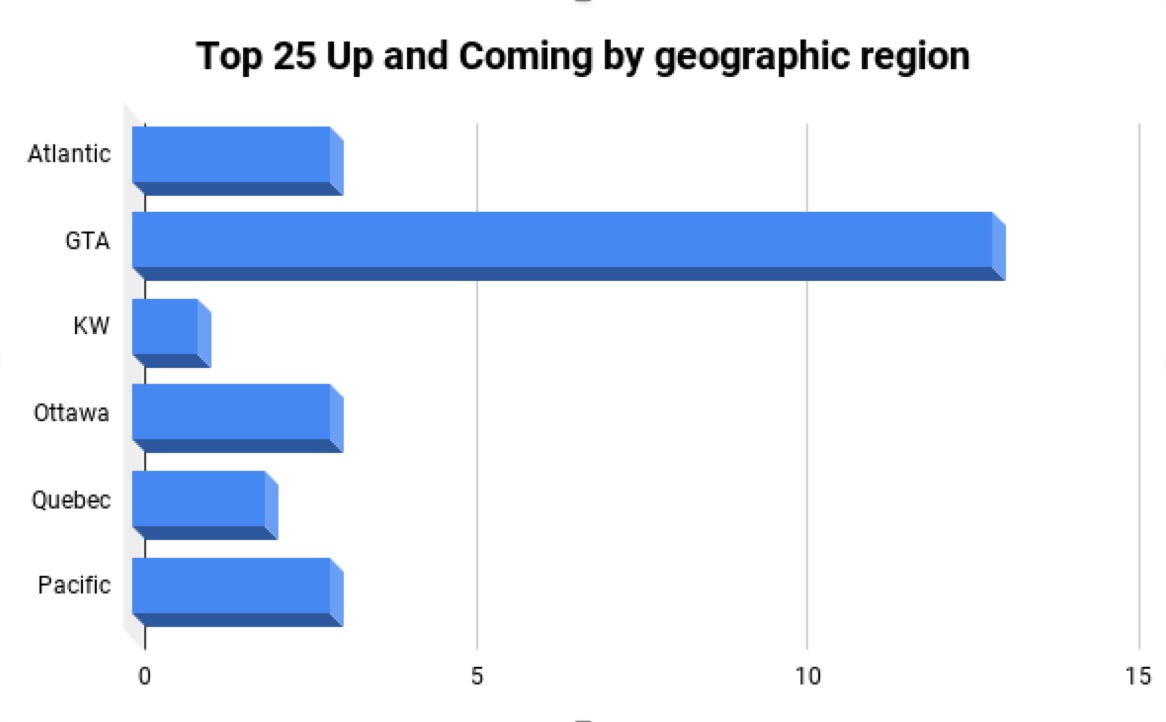 The Branham300 is the best-known and most widely referenced listing of Canada’s top ICT companies, ranked by revenue. The listing also tracks the top ICT multinationals operating in Canada, plus Up and Comers, those young Canadian companies Branham Group believes will be big hits soon.

Branham Group’s ranking is unique in Canada because it tracks both publicly held and privately owned companies. It is the only comprehensive list to do so.

Sub-listings that are generated from the Top 250 listing include:

Branham Group Inc. (www.branhamgroup.com), is a Canadian based, globally directed Industry Analyst and Strategic Advisory for the Information and Communications Technology (ICT) sector. Branham provides Planning – Marketing – Partnering services for established and new technology brands in the global market. With its Branham300 database, Branham has expansive data on the Canadian ICT industry. The Branham300 is a unique community in the Canadian ICT sector that includes privately held and publicly traded tech companies in Canada.